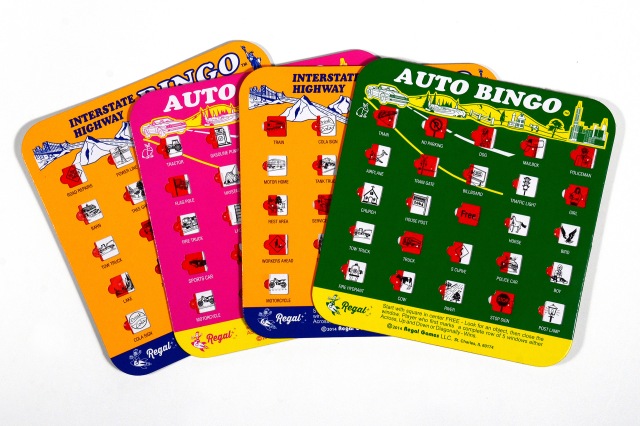 Many years ago, I was in charge of a marketing research study being fielded at the LA Auto Show. So on Saturday morning I buckled my son Luke into his booster-seat (he was maybe five or six at the time) and we made the drive to the LA Convention Center from our home in Mission Viejo to check on my team of clipboard-wielding researchers. To keep him occupied as we drove, I gave Luke one of those bingo cards you use to keep kids entertained on road trips.

Red car? Check. Stop sign? Check. Overpass? Check. Near the end of our 100-mile roundtrip, Luke had spied almost every one of the 25 items on the card. As we sailed past the Tustin Market­place in the light weekend traffic, he informed me that the only thing he hadn’t spotted was a police car. “Seriously?” I exclaimed in disbelief. “We go all the way to LA and back and we don’t see even ONE police car? Come on! That should be an easy one. We can do this!”

Not even 60 seconds later—I kid you not—a red light appeared in my rearview mirror. It was like some sort of cosmic joke, and I was the punchline. As I rolled down my window, I greeted the CHP officer with a pained smile and said: “BINGO!” I won’t recount to you what else was going through my head at the time, but you can bet it wasn’t plucked from the pages of scripture. Had I purer heart and a clearer sense of irony, I might have envisioned a grinning Savior, winking as He gently repeated a familiar phrase from the Sermon on the Mount: “Seek, and ye shall find” (Matthew 7:7).

Now I don’t believe for a minute that when Jesus first said those words he was trying to help us win backseat bingo. But the idea is repeated frequently enough in holy writ that it’s clear that God is eager for us to seek His help as we earnestly search for things of worth that truly matter to us. It’s a foundational principle. I have marveled, for instance, at how often children recount times in which they have lost something precious, whispered a tender prayer, and then found what they had misplaced almost immediately thereafter. I have wondered if this is how God introduces kids to the language of the Spirit.

Now perhaps you are more cynical than I. You consider all of this and say: “Yeah, well, it doesn’t work that way for me.” You would certainly not be alone in that sentiment, but let me caution that in so saying you may be echoing Lehi’s recalcitrant sons, who complained that God would not answer their prayers even though (they admitted) they hadn’t even bothered to ask (see: 1 Nephi 15:1-9). Note that in Jesus’s famous sermon the seeking precedes the finding.

Just the other day, a friend of mine asked me if I knew of a shoe repair shop here in the neighborhood. I admitted that I did not. A couple of days later I was driving down Chapman Avenue as I have several times a week for the last 20 years. And—wouldn’t you know it—I spotted an old, dusty shoe repair shop just minutes from my home, a shop that has likely been there for years. It then occurred to me that the shop didn’t suddenly appear; it wasn’t until I began searching that I spotted what had likely been there all along.

So it is with the things of God. When we seek, He helps us find what we may have otherwise overlooked.  Which leads me to ask: What are YOU searching for? And what are you going to do about it?