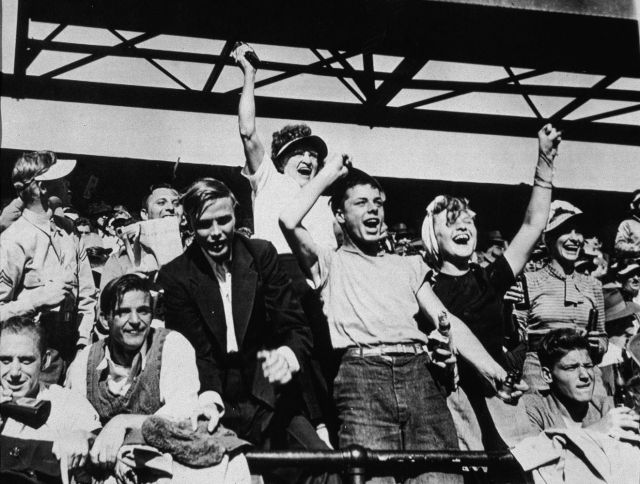 One of my many (and most glaring) character flaws is that I care way too much whether or not my team wins. That hyper-competitiveness has served me well only to the degree that it has driven me to strive for excellence in most of my endeavors (home repair being a conspicuous contrapositive). And while I have been somewhat successful over the years at suppressing those emotional urges, they still manifest themselves from time to time in awkward circumstances: during the scramble for the final wedge in Trivial Pursuit, for example, or in a three-legged race at the company picnic. It’s embarrassing.

Where that desire to win manifests itself most darkly is in the world of competitive team sports. If my Bruins lose a close one, it can send me into a funk that lasts for days, especially (as it so often seems) when they should have won. If I had the misfortune of being from, say, Cleveland, this competitive spirit might not have such a firm hold on me. But I grew up cheering for the Dodgers and Lakers and UCLA, teams with enough history of success that victory and even championships are often a distinct possibility, resulting in expectations in profound disproportion to objective reality.

So you can imagine, without any creative effort, how I was feeling last night when my Dodgers, who haven’t won a championship since before my children were born, blew multiple leads and lost 13-12 to the Astros in Game 5 of the World Series. Now, if you are a well-adjusted human, you might reasonably think: I didn’t even realize the Dodgers were in the World Series; or, What’s the World Series? But if you’re me, and the Dodgers end up losing the Series, you can expect to relive the agony of last night’s debacle for years to come. I still get aggravated by how the USA got swindled out of an Olympic gold medal in basketball by the USSR. In 1972. When I was 12.

Unlike the stock market, which provides a buyer for every seller, the sports world is completely imbalanced, with devastated losers far outnumbering euphoric winners in any given season. In a playoff, in fact, every team but one ends its year with a disappointing loss. And if we shrink that world down to mine (the only one that TRULY matters in this context) the moments of euphoria are infrequent and precious. For even though my teams have a history of occasional excellence, history fades even as the possibility of a letdown casts a heavy, constant shadow over whatever is happening right now.

As a remedy to all of this, years ago I committed myself to the following rooting philosophy: Hope without optimism. I believe in it so firmly that I have taught it like a catechism to my children. For I believe that that philosophy carries with it both the fervent possibility of victory and the realistic expectation that we’ll miss the winning field goal in the final seconds. It’s my attempt to maximize the prospective euphoria while mitigating the nearly-inevitable devastation. It’s not a perfect remedy, but it helps.

All of this runs counter to what Jesus taught, of course. “In the world ye shall have tribulation,” He said, “but be of good cheer; I have overcome the world” (John 16:33). Other scripture encourages us to have “a perfect brightness of hope,” knowing that, if we endure well the trials that may lie ahead, in the end we shall have eternal life (see 2 Nephi 31:20). That is the promise of Christ’s resurrection and Atonement: the promise of victory for everyone, a championship even for the most beleaguered among us. His message was all about both hope AND optimism.

Which is a very good thing—especially if the Dodgers blow this Series, which they should have won. Because if that happens, I could just die.

2 thoughts on “Hope Without Optimism”