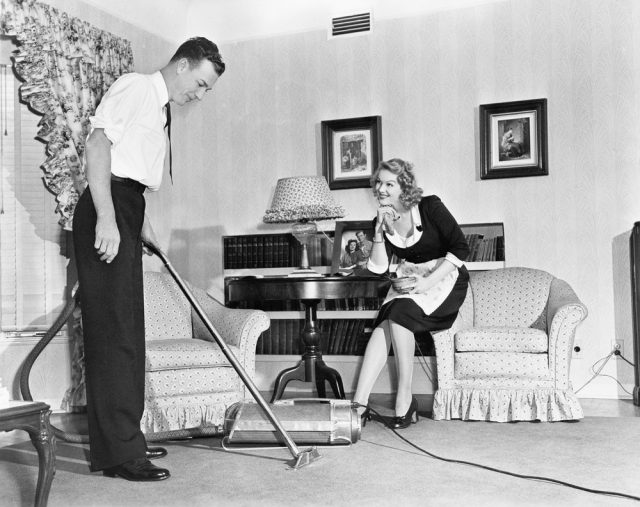 When it comes to home maintenance and repairs, I’m what they call in the trades Really Bad At It, or Utterly Useless, for short. You might recall, for example, how I somehow managed to destroy a fairly-new reverse-osmosis system while trying to fix a small leak under the kitchen sink. I could fill this page with other humiliating examples of my ineptitude, but let’s skip over that formality and go directly to this week’s confession: I’ve done it again. The legend continues.

As always, it started out innocently enough: I was simply trying to do a little vacuuming—a low-skill assignment for which even I am qualified. I might even go so far as to claim a certain degree of competence in the field of Automated Dust Removal. But as I was maneuvering out into the upstairs hallway, I became aware that the family Hoover was no longer Hooving. “This thing sucks,” I hollered at my wife, Dana. “It’s supposed to,” she offered cheerfully. “It’s a vacuum cleaner.”

Diagnosing that there must be something obstructing the brush mechanism, I set about disassembling the intake unit. I figured I just had to remove a couple of screws, clear out the obstruction, and put the thing back together. I can work a screwdriver, I thought. How hard can it be? Right? Well, more than a dozen screws later, I finally had it opened.

It took me little time to clean out the brush and intake, but getting the base to snap back into place proved a little trickier—especially when I discovered that a small, metal bracket had joined the loose screws scattered about me. I knew where the bracket belonged, but getting it back into place appeared to defy several physical laws while tenaciously affirming the Second Law of Thermodynamics. Soon I looked like Jim wrestling a crocodile on Mutual of Omaha’s Wild Kingdom. And the croc was winning.

The new machine (not a crocodile, but a Shark®) arrived a couple of days later. Seth offered to take Sharknado out on its maiden run, and when he was done we were shocked to see how much gunk it had managed to collect. Walking around the house afterward, we noted how different the carpet felt—like it was brand new. Hmmm. (Let that thought swirl around your head for a little bit.)

So it turns out the old Hoover really did suck, but unfortunately not in the manner that it was supposed to. Who knows how much grime has been accumulating over the past many months, or how long, for that matter, we had been shuffling around in it? Ewww. So in the end, my failed repair work may have been the best thing that has happened to our carpet since it was installed.

And thus emerges the familiar pattern in another embarrassing tale: Something goes wrong, and in my attempts to make it better I make it much, much worse. But in the end—somehow—I end up far better off than I could ever have been had disaster not struck to begin with. Happens all the time. I’m pretty sure Paul wasn’t thinking about carpet cleaning when he said that “all things work together for good to them that love God” (Romans 8:28), but on the other hand, isn’t it curious how much good comes from the bad stuff we unintentionally make worse? Interesting how that works. Carpet Diem!